Economically and realistically, you cannot quantify or put a minimum price on artistic work. Everyone wants to be part of a union but they also want to focus and build upon their own individual careers.

The third edition of Artists’ Corner took place on March 19, 2018, at Depot48, New Delhi. We partnered and co-organised the panel discussion with the wonderful Depot48 team including Girjashanker Vohra, Vikas Narula, and Nishad Pandey. (You can follow this link for photos from the event)

Our key takeaway from the previous Artists’ Corner discussion in Delhi, centered on the demand for more professional and diverse artist managers. In pursuit of continuing this conversation and building upon it, we designed this edition’s agenda around this concern. The panelists and invitees delved into deep dialogue on whether or not there is an actual need for managers and if yes, how one would define the role of managers. We briefly segued, into music schools and their instrumentality in producing managers and other facilitators in addition to musicians. Tying up the loose ends was our final focal point on the music industry’s ultimate goal – to promote an artist’s career growth or to create an ecosystem. 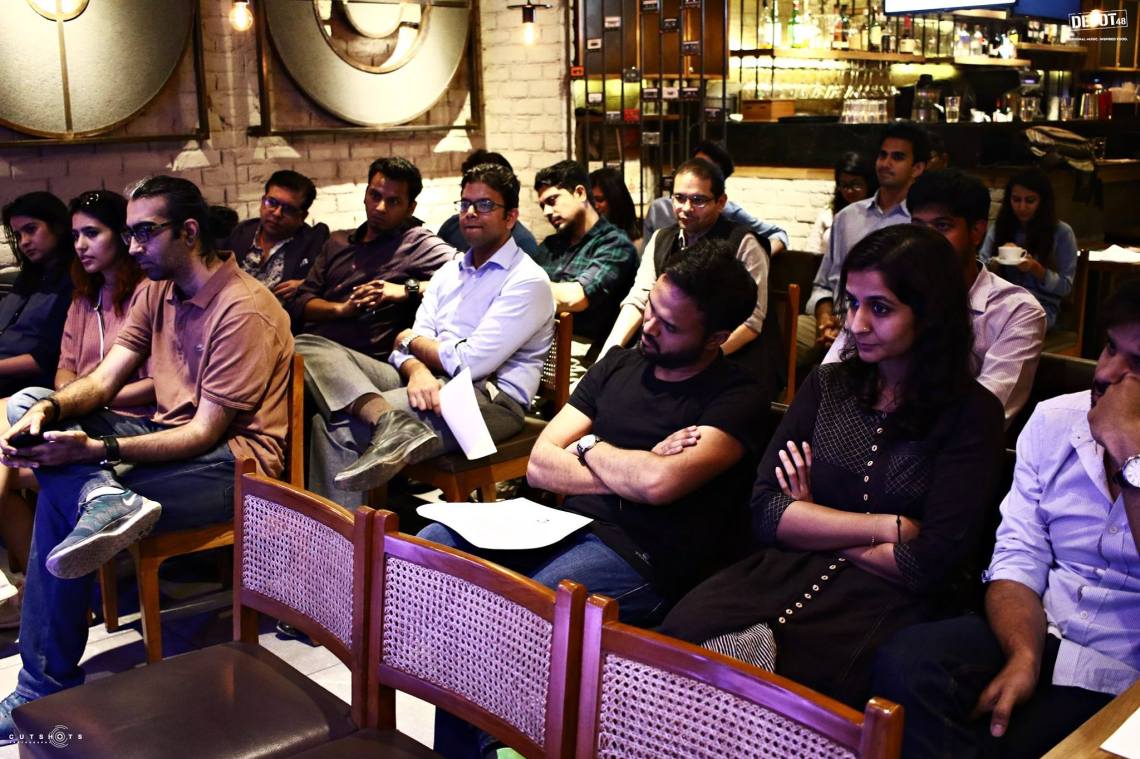 Our panel comprised representation from different facets of the music industry – performing musicians, managers, curators/programmers, and music educators/teachers. Aditya Balani (musician, director and co-founder, Global Music Institute) offered his perspective as a musician and emphasised the importance of music education, Nishad Pandey (musician and programmer at Depot48) drew a comparison between the sustainability of musicians in India and Berlin (where he currently resides), Ritnika Nayan (owner, Music Gets Me High and author, Indie 101) added valuable inputs from her years of experience as an artist manager, and Sonam Kalra (singer-songwriter and musician) who advocated for establishing a minimum fee payable to artists. Our vibrant and potent panel was moderated by Artistik License’s founder, Manojna Yeluri.

As is the format of our Artists’ Corner discussions, the first half was dedicated to the panelists whilst the audience interaction took place in the latter half.

We commenced the session with one of the most debated topics in the music industry i.e., managers versus booking agents. In Ritnika Nayan’s opinion, the long standing problem in India is the failure to distinguish between managers and booking agents. Her standpoint was that a manager neither works for the artist nor is a gatekeeper to the music industry. Rather, she asserted, a manager is a member of the band who is responsible for the financial and business affairs of a band.

To a large extent, the panelists were in agreement with Nayan. Singer-songwriter, Sonam Kalra added that it’s crucial for managers to understand the artist’s work, but the absence or lack of a manager is not an impediment or the end of an artist’s career.

On the subject of music institutions and schools generating more than just musicians, GMI co-founder, Aditya Balani stated that it’s integral for schools to also produce and hone managers and other facilitators who help in the growth of artists. However, he also pointed out that the fragmented indie scene with barely any gigs for artists themselves, is one of the reasons for the lack of courses on music business in India. His statement was received with mixed reactions, one participant claiming simultaneous growth is important and possible.

From a programmer’s point of view in India, Nishad Pandey finds it harder to deal with managers of bands as it can be difficult to identify said manager. As a performing musician in India as well as Berlin, his observation of the music scene in Berlin is that it is very saturated with high quality musicians and there are hardly any managers in the jazz and improvised music scene.

The panel was surprisingly in consensus regarding unionisation. They agreed that in an ideal, utopian world, it would be great to have a minimum fee paid to artists. However, the inevitable barrier is quantifying and valuing music. Creating a union to help each other out and share resources would be more fruitful.

On the topic of creating a union, Sharif Rangnekar (founder, Embrace: Music Justice Arts) suggested an alternate model to a union such as an association. An association that will advocate change and create a voice, actively identify sponsors, copyright influencers, and collaborate with people who are willing to provide spaces for artists to perform without diluting their art, and most pertinently, a sensitive government on the other end to accommodate these changes.

With respect to government funding and grants, Nitish Bhardwaj (co-founder, Skillbox) was quick to point out that these government-run organisations tend to focus more on rapidly diminishing Indian folk art and music. While he agreed that the indie scene also required resources and attention, he made a valid statement about how much more valuable these funds and support are to highly skilled but uneducated folk musicians.

Takeaways from the discussion

We relearnt that the music industry really needs to differentiate between booking agents and managers – two separate but interdependent players in the industry. A major concern voiced by the participants is the lack of professionalism in the industry. The action point in this edition of Artists’ Corner is for artists to articulate their minimum expectations and framing basic terms and conditions before approaching managers and venues.

Our intention following every Artists’ Corner is to share action points/tasks in order to maintain accountability and direction. To this end, we are initiating an activity/exercise that is going to involve members from the independent music community in Delhi. We will be sharing more details via our newsletter as well as our Artists’ Corner mailing list shortly, although in a nutshell, we are going to explore the potential of community built contracts/ Terms and conditions by creating a template that (a) is going to be open to your comments and inputs; and (b) once finalised, is free for use by any of you.

We also foresee some changes with respect to future editions of Artists’ Corner and hope to continually receive your enthusiasm and support.